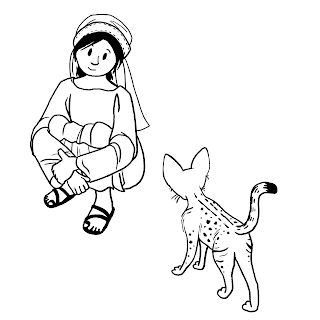 Rebekah’s curiosity piqued at the sight of the striped cat moving towards her. “A cat?  Is he a friendly creature?” The cat looked as though it would be soft to the touch, but Rebekah was still a bit afraid of the unfamiliar animal. Imhotep continued to come closer, stopping to emit an inquisitive “meow”.

“I think he likes you, Rebekah,” said Daniel. “I’ve only heard him make that noise when he wants to be picked up and petted.”

“Do you think it’s safe?” she asked. As Imhotep got closer, Rebekah caught a glimpse of his sharp teeth.

“I wouldn’t give you a gift if I didn’t think it was safe, Rebekah. I held him plenty of times on the journey home and he seemed to enjoy it.”

Rebekah crouched down and Imhotep immediately closed the distance between them. She scooped him up in her arms and he rubbed his head against her hands. She began to stroke his fur and scratch him behind his ears. As Imhotep purred gently, it seemed as though they formed an instant bond of friendship.

“He obviously likes you, Rebekah. The two of you are getting along just fine,” Daniel said with satisfaction.

“Oh, Father, he’s so soft and wonderful to cuddle! What did you say his name was again?” asked Rebekah.

“His name is Imhotep. It means ‘the bringer of peace’.”  Daniel then proceeded to share the story of how he saved the trader in the market and was given the cat as a gift. “He may seem peaceful in your arms, but Imhotep is also a tremendous hunter.  He’s caught plenty of mice among the grain sacks we have brought back from Egypt. I’ll certainly enjoy having him around the house if he continues to keep the rodents away from our food.”

Rebekah continued to hold Imhotep as the group completed the final phase of their journey home. After a short while, he squirmed a bit in her arms, so she carefully set him down so he could walk along with them.  He loved to dart about their feet as they walked, sometimes pouncing at the hanging straps of their sandals. Imhotep was always alert and nothing seemed to escape his gaze.  As they came within sight of their village, Rebekah worried how her mother would react to the new member of their household. Mother was never one to see animals as anything other than laborers. If animals couldn’t help with the work, she saw no need to keep them.

“Father,” Rebekah inquired, “What if Mother doesn’t like Imhotep?  What if she won’t let me keep him?” The worry in her voice was evident.

“I don’t think you have to worry about that, Rebekah,” her father said.  “Who wouldn’t love a cuddly, cute cat?” He reached down to give Imhotep a pat on the back of his head, but Imhotep responded by swiping at Daniel’s hand, scratching a few thin lines on the skin of his wrist.  “Ouch!” Daniel exclaimed. “Hmm...this could be trouble,” he thought.

Next: Imhotep Gets a New Home

“Esther!” Daniel exclaimed excitedly when he saw her approaching. “I’m glad you’re here. I was just finished making a deal with these shepherds for some of the softest wool I’ve ever felt!” He gestured over to the cart, which was half full of creamy white bales of wool. Imhotep leaped from Rebekah’s arms and hopped up into the cart, burying himself up to his neck in the wool. This made Daniel and his whole family laugh, though the shepherds seemed rather surprised to see this unusual animal.  “It’s all right,” Daniel said, reassuring the shepherds. “That’s a cat.  He was given to me as a gift from a trader in Egypt, and I gave him to my daughter as a pet. He’s actually a wonderful animal to have around, since he keeps the mice and snakes away.” The shepherds nodded hesitantly, still not quite sure what to make of Imhotep as they watched the cat prowling around in the wool, seeking his next meal. “I don’t think you’ll find any mice in there, Imhotep,” Rebekah told her cat. “They love
Read more