The remainder of the journey home was uneventful.  Imhotep continued to search among the sacks of grain for tasty snacks.  His search was often successful, which made Daniel even more appreciative of the unexpected gift he received in Egypt.  He still wasn’t sure about how Rebekah would react to Imhotep, but if the trader was correct, she’d love him.  The cat was definitely an interesting creature.  One minute, he'd act like a fierce hunter and then next, he'd leap into Daniel's arms, wanting to be scratched and held.

As the travelers drew closer to Nain, one of the brothers left the group and headed twoard home at a quicker pace. On previous trips, they had learned the value of alerting the hired workers and family at home so the household could prepare for the arrival of the caravan loaded with goods. The older children would then head out to meet the travelers an hour or so before they arrived in Nain, completing the journey with their fathers and uncles.  Daniel knew that Rebekah would be eager to be among that group, and he wondered if this would be the time when her mother finally allowed her to go.

Back in Nain, Rebekah had been diligently working to soften her mother up to her request.  She had been especially helpful around the house the past few days, always agreeing with whatever her mother would say.  Rebekah did all of her chores to the best of her ability and never once complained when it was time to go to bed.  When her uncle arrived home ahead of the caravan, she approached her mother, hoping that this would finally be the time that she'd be allowed to join her cousins in heading west to greet her father on his return from Egypt.

“Mother?” Rebekah asked, with the sweetest smile she could muster.

“Yes, Rebekah,” her mother replied, “you can join your cousins to go and meet the returning caravan.”

“But Mother, how did you know what I was going to ask?” Rebekah inquired.

“I’ve noticed how cooperative and helpful you’ve been the past few days.  Do you really think I didn’t know what you were up to?” her mother said with a wink and a smile. 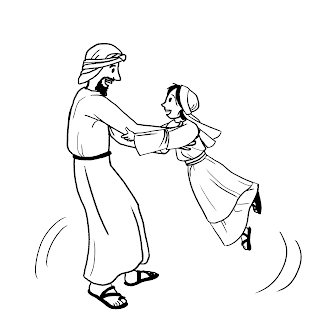 “Oh, thank you, Mother!” Rebekah squealed.  “I promise to be very careful and stay close to my cousins the whole time.”  Rebekah ran from her home and joined the rest of her older cousins who were already starting the journey west to meet the returning travelers.  It only took them about an hour to finally spot the approaching group in the distance.  It felt like it took forever to   reach them, but they finally did, and Rebekah greeted her father by sprinting toward him and leaping into his arms.  Daniel hugged her tightly and swung her around until they both began to feel dizzy.

“Oh ahuva, I’ve missed you so much!” Daniel exclaimed, before setting Rebekah back down.

“I’m so glad you’re safely home, Father,” she replied.  Just then, she saw something strange peaking out from behind the nearby cart.  It was unlike anything she had ever seen before.  She pointed at the small, furry animal and asked, “Father, what in the world is that?”

Daniel looked toward the cat and said, “This is the gift I brought you from Egypt.  His name is Imhotep and he is a cat."