Daniel found a few more unique items in the market and then headed back to the docks, his furry gift still cradled in his arm.  When his brothers saw what he was carrying, they were shocked. “What are you doing with that creature?” they asked. The looks on their faces told Daniel they would not soon warm up to Imhotep. Even after Daniel told the story of how he came to receive this unexpected gift, the brothers were not enthusiastic about having a new member in their traveling party. They oversaw the loading of the boat and headed to sea, eager to return to their homes.

Imhotep clung to Daniel as the boat rocked slightly in the gentle waves of the Mediterranean Sea. Daniel noticed that the cat had very sharp claws that dug into his arms, an obvious reaction to the fear the cat was displaying. He started to question whether it was a bad idea to give his daughter an animal with such sharp claws. The trader told him how his own children loved the cat, but Daniel wasn’t so sure how Rebekah would feel about it. 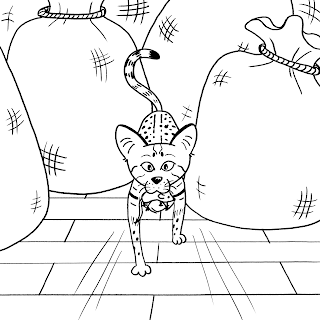 As the journey continued, Imhotep relaxed and began to prowl the ship. The rest of Daniel’s family tolerated the cat, as long as he didn't get too close to them. Daniel observed Imhotep pacing back and forth near the large pile of grain sacks. He watched as the cat froze in place, his ears aimed forward and his eyes staring directly at a particular sack of grain near the edge of the pile. He wiggled his back side slightly and then darted forward into the pile.  Imhotep moved so swiftly that Daniel could barely follow him.  The cat emerged from the grain sacks with a small rodent hanging from his mouth.  Apparently, Imhotep was quite the hunter. Daniel nodded approvingly. Perhaps it would be nice to have a cat around the house after all.

The travelers arrived safely in Gaza, picked up their pack animals and loaded them and their cart with all the goods from Egypt. They also loaded up a generous amount of dried fish that they had arranged for when they first arrived in Gaza, and began the final leg of their journey home.  Daniel’s father had spent some time with the locals, leaving the hard work to his sons who were younger and stronger than he was. “I discovered something interesting while meeting with some local officials,” his father stated. “A census is going to be taken.  When we return home, we’ll have to start planning for a trip to Bethlehem.  Since we are from the line of David, we need to return to Bethlehem to be counted.”

“Another census?” complained Daniel’s oldest brother, Philip. “Hasn’t the government taken enough of our money by now?  Every time another census is taken, it seems as though our taxes are raised even higher.”

“I understand your frustration, my son,” replied their father. “We must remember that God has blessed us with more wealth than we need, so even if the tax is raised, we will still be comfortable. It is also a good reminder that someday the Messiah will come and free us from the rule of the Romans. Now let’s get back home so we can enjoy a little time with the rest of our family before we head to Bethlehem.”