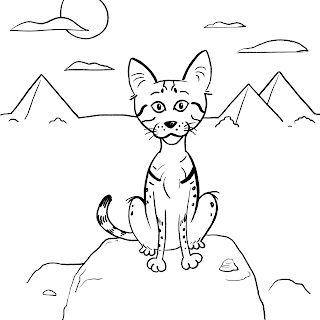 Daniel held the cat at arms length and looked curiously at it. He had seen a few of these creatures slinking around the market on previous occasions, but had never touched one, or seen one up close. The animal was soft, and pleasant to hold, and it began making a rhythmic noise which sounded somewhat like his father when he falls asleep and snores lightly. “What is this animal called?” Daniel asked with a somewhat hesitant expression on his face.

“Why, he’s a cat,” the trader exclaimed. “Don’t you have cats in Galilee?” He couldn’t imagine anyone not recognizing a cat.

“I’ve seen a few of them before on my other trips to Egypt, but we don’t have these back home.  I’ve never seen one up close before.” said Daniel. The cat squirmed slightly in his arms, forcing him to adjust his grasp and hold it closer to his body.

“Cats are magical creatures. They bring good luck to anyone who houses one. This cat is especially adept at keeping rodents and vipers away from my grain and my house. Surely you have those where you live.” the trader said. “There are probably more cats in Egypt than there are people.  We love our cats!  Our children are especially fond of them.”

Daniel looked down at his new gift. If he could help keep the rodents out of his grain, he may be a valued prize after all. He also now realized that he had yet to get a gift for Rebekah. If he came home without one, she would be sorely disappointed. “You say children like them too?  I have a daughter who always enjoys it when I bring her something exotic and unique from my trips to Egypt.”

“She will absolutely love this gift. My own daughters have loved this cat since the day it was born.  He is one of their favorites,” the trader explained.

“Well, I can't accept this cat if your own daughters love it so much. I would hate to separate it from them,” Daniel stated as he began to hand the cat back to the trader.

“I insist that you keep him,” replied the trader. “Besides, we have dozens of cats in my household.  My girls will hardly miss him at all. You saved my life and deserve to be rewarded with a very special gift, like this cat.”

Daniel brought the cat back closer to his chest, cradling it in his arms. He felt himself becoming attached to the strange creature. The cat seemed to calm and relax him, though it was a little hard to imagine this animal being a skilled killer of pests. “In that case, I will accept your gift.  Thank you,” said Daniel. He noticed his brothers were coming his way, having finished their final trades. “I should head for the docks now. My relatives and I have a long journey ahead of us.”

“One more thing,” the trader mentioned as Daniel was preparing to leave. “The cat’s name is Imhotep.  He will respond to that.”

Daniel had never heard that name before. “What does that mean?” he inquired of the trader.

“It means, ‘the one who comes in peace’,” the trader replied. “May you find this to be true.”

Next: A Skilled Hunter