Daniel both enjoyed and dreaded days like today. He woke up early, since he would need to travel with his father and brothers on the long journey to Egypt. He enjoyed the adventure of traveling to a different land, but he greatly missed his wife and daughter- during the time he was away from them. Daniel also dreaded the thought of having to be on a boat for a few days to get to Egypt.  He never felt very safe when not on dry land.

As an olive grower, Daniel was thankful to God for the ability to provide for his family; but in order to survive, they had to trade their olive oil for food and other goods. Like most countries, Egypt used olive oil for many things, so it was a highly sought product. Though the journey to Egypt was a long one, it was the best place to get the most amount in trade for the olive oil that Daniel and his family produced.

Rebekah watched as her father, uncles and grandfather marched out of Nain. They had a cart full of olive oil, pulled by a pair of oxen. A pair of camels and three donkeys, each loaded with more weight than any man could carry, round out this small caravan that was headed for Gaza.  Rebekah kept her eyes on the group of travelers until they were nothing more than a speck in the distance.  She then returned to her home and her mother. 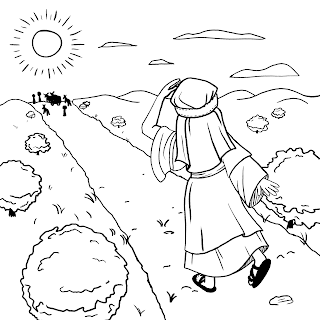 “Mother, why couldn’t I go along this time?” Rebekah said with a face. She said the same thing the last 3 times Daniel had to make this trading trip.

Her mother looked at her with a bit of sadness in her eyes. She knew how much Rebekah was like her father, always curious and seeking new adventures. “You know the answer to that, don’t you ahuva?“

“I know...” Rebekah answered. “Because it’s too dangerous and you’d miss me too much. But do you have to keep calling me ahuva? I’m too old for that name!”

Esther stopped her cleaning and came closer to Rebekah. She sat by her side and placed an arm around her shoulders, pulling her close for a long hug. “I’ll never stop calling you that. I called you ahuva when you were tiny and I felt you leap in my womb. I called you ahuva when I first held you in my arms. You will always be ahuva to me. And do you know why?”

“Yes, mother.” Rebekah couldn’t help but lean into her mother, returning the hug. “Because ahuva means ‘beloved’ and I’ll always be your beloved."

“That’s right, Rebekah,” her mother said in a soft voice. Esther always got a bit sad when Daniel left on his trading trips, but she tried not to let Rebekah see how much she truly worried about her husband. “To your father and I, you will always be ahuva.” Esther held the embrace a little longer than she normally would, praying to God that her husband would be safe on his long journey to Egypt.

Next: The Trip to Egypt