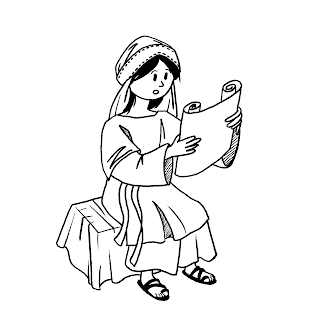 Once upon a time, about 2,000 years ago, a girl named Rebekah lived in Nain, a tiny village in Galilee. Rebekah was an only child. Her father, Daniel, was an olive grower. Daniel, along with his father and his 5 brothers, owned the largest olive grove in the region. Though she didn't have any siblings, Rebekah had dozens of cousins to play with since they all lived together in Nain. Even though she had plenty of relatives she often felt alone and a little different from the rest of her family.

Rebekah and her family were Jewish. They followed the laws of Moses and they worshipped Yahweh, the one true God.  Like all Jewish people, they waited patiently for the arrival of the Messiah, the one who would bring peace to the world. Unlike many of the girls in Nain, Rebekah knew much of the Bible because her parents spent many hours teaching her to read the Hebrew texts.

“Dad, why did you say Rebekah was unlike many of the girls? Didn’t everyone go to school back then?” Emma loved school and struggled with the idea that someone may not enjoy learning, or might not be allowed to go to school.

“Well, Emma, life was very different for people of that time. Most girls did not receive a formal education. Only the boys did. Girls were often taught domestic skills so they could help their mothers around the house. They would learn cooking, cleaning and embroidery - skills that would also help them when they became mothers themselves.”

Ethan’s curiosity was obviously peaked as he asked, “So did Rebekah learn all of that stuff too, or did her parents let her skip that so she could study the Bible more?”

Dad replied, “Why don’t we get back to the story so we can find out?”

Since Rebekah was an only child, her parents spent plenty of time with her. She helped her mother, Esther, with all of the chores around the house, but her parents indulged her hunger for learning by spending extra time with her each evening. She enjoyed nothing more than spending time with her father, studying the scriptures.

One morning, Rebekah woke with a sadness that was all too familiar. She knew this was the day that her father was leaving on another journey with her uncles to trade olive oil for grain. A few times each year, they made the long journey from Nain to Egypt in order to exchange goods with the Egyptian people. Egypt was known as the breadbasket of Rome, since they produced more grain than any other country in the region. Rome controlled most of the known world at that time, and Egypt was highly prized for its ability to feed Roman citizens all around the Mediterranean Sea.

Rebekah’s father, his 5 brothers, and her grandfather loaded some camels and donkeys and a cart pulled by a pair of oxen with jars of olive oil to be taken to the coastal city of Gaza, where they would transfer them to a boat for the 2 hour journey to Pelusium, the Egyptian city where they did their trading. As much as she would miss her father, he always brought her something exotic and special when he returned from his trading adventures. Rebekah was curious what her gift would be this time.