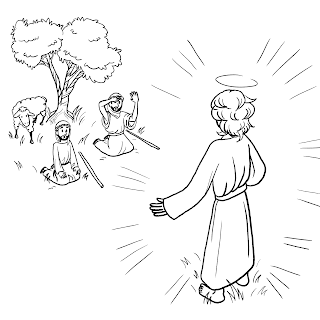 The shepherds gave Daniel directions about where to find the field where they were watching their sheep. Daniel and his family watched their new friends leave and head back out to the fields where the sheep were grazing. Daniel, Esther and Rebekah, along with Imhotep, had a little more trading to do before they went to join the shepherds and accept their hospitality. Esther was able to convince Daniel to trade for some beautiful bolts of cloth that she found among one of the many traders’ items. Rebekah was treated to some figs and apricots, and a small portion of dried fish was purchased for Imhotep to enjoy. While Esther and Rebekah climbed into their cart, Imhotep curled up in the soft wool and was quickly purring loudly as he napped.  Daniel led the donkey and the ox-drawn cart out of Bethlehem and into the countryside.  It only took them about a half an hour to arrive at the shepherds’ field.

There were several shepherds out in the field.  The ones who had met Daniel in Bethlehem waved to him as he got closer.  “I’m glad you were able to join us,” said one of them. “You gave us a very favorable deal for the olive oil you had. We’re happy to repay that kindness by offering you a place to sleep.  Feel free to find some room under the tent we have set up.  There’s plenty of space, since many of us are in the field watching over the sheep at night.”

“Thank you again,” Daniel replied. Daniel led the cart over to the shepherds’ tent and set up a small sleeping area for himself, Esther and Rebekah. Imhotep explored his new surroundings, but then quickly returned to Rebekah’s side as she tried out her improvised bed of wool. The family ate a small meal, and as the sun set on the horizon, they lay down and went to sleep.

Sometime later, a bright light caused Rebekah to wake from her sleep.  It couldn’t be morning already, she thought, drowsily rubbing her eyes. The light was very bright, but seemed different from sunlight. Her father and mother stirred and sat up from their beds.  “What is that light?” Esther asked.

“I don’t know,” Daniel replied. All three of them stepped out of the tent and looked in the direction of the bright light. They saw the shepherds as clearly as if it were daytime. They were kneeling down near a small tree, with someone standing in front of the men. That person was glowing unlike anything the little family had ever seen before. Rebekah could hear the glowing person talking, but she couldn’t quite understand what was being said. As Daniel, Esther and Rebekah continued to watch, they were amazed to see hundreds of glowing figures suddenly appearing alongside the first one.  They heard the large group praising God and saying:

“Glory to God in the highest heaven, and on earth peace to those on whom his favor rests.”

Then, as quickly as they appeared, all of the glowing people ascended up into the heavens and were gone. It took a few seconds for the family’s eyes to adjust to the darkness again, but when they did, they saw the shepherds hurrying toward them. The shepherds woke their still sleeping companions and could not contain their excitement. “We need to go to Bethlehem!” one of the shepherds shouted.

“It’s the middle of the night,” replied one of the men, stifling a yawn. “Why can’t it wait until morning?”

“An angel of the Lord just told us that the Messiah has been born today, in the city of David. We must go and find him!”

Next: A Gift for a King