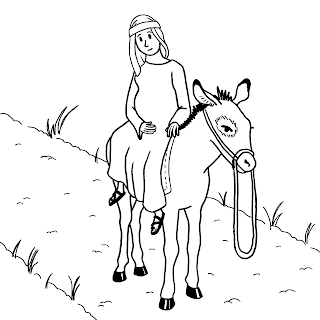 After a good night’s rest, the newly formed group ate a quick breakfast meal and then prepared to make the final leg of their journey to Bethlehem.  Esther watched Mary as she struggled to her feet.  The only way that Mary was able to get upright was with the help of Joseph.  Esther couldn’t imagine having to walk as far as Mary had, while being so close to her time of giving birth. Just then, she thought of something that might help. She shared her idea with Rebekah, who thought it was a great way to help their new friend.  Esther called Daniel over to share the idea with him.
“Daniel, I can’t believe Mary has made it this far in her condition. Walking must be getting harder for her every day. I thought about offering her a ride in the cart, but it’s probably even more uncomfortable than walking. Do you think you could unload our goods from our donkey and move them into the cart? Rebekah and I wouldn’t mind walking the final distance to Bethlehem, and then Mary could ride on our donkey,” Esther smiled at her husband as she shared her request with him. Daniel didn’t hesitate with his answer.
“That’s a great idea, Esther. I’d be happy to unload the donkey if you’ll go and share our offer with Mary,” he answered.
Esther and Rebekah headed over to where Mary and Joseph were packing their things.  The day had just begun, but Mary already seemed to be tired.  “Mary,” Esther said, “I’m sure all of the walking you’ve been doing has been very exhausting for you. Rebekah and I are also quite tired of riding in our cart, as it’s a very rough ride on these paths we’ve been taking.  We thought we would walk this final stretch, which gives us room in our cart for all of our goods that we’ve brought along. The donkey no longer has to carry anything of ours, so we would love to offer you a ride on his back. He’s actually much more comfortable to ride on than riding in the cart, and also seems to behave best when carrying a person instead of bags of grain or a load of olive oil.”
Mary had an excited look on her face, but she was quick to politely say, “That’s very kind of you but I don’t want to cause you any trouble. I can walk the rest of the way.”
“Oh, it’s no trouble at all!” Rebekah exclaimed.  “Mother and I really need to stretch our legs and we’re happy to offer you a ride.”
Joseph looked at Mary as he spoke up, “Mary, I think it might be best for the baby if you stay off your feet and ride this last part of the journey.”
“How can we repay you for all of the kindness you have shown us?” Mary asked Rebekah and Esther.

Esther placed her hand gently on Mary’s shoulder and answered, “Accepting the ride on our donkey is thanks enough. We’ve enjoyed meeting you and are thankful for the opportunity to share what we have with both of you.”  Mary hugged Esther gratefully and then turned and hugged Rebekah as well. They all walked over to the donkey, and after Daniel covered the animal’s back with a few blankets, Daniel and Joseph helped Mary onto the donkey.

Next: A Smooth Ride