Mary laughed at the thought of her being considered special.  It wasn’t very long ago that she was just a young girl from Nazareth, pledged to be married to Joseph, and wondering what God had planned for her life. She felt as ordinary as anyone and about as far from “special” as anyone could be. All of that changed during the past year though, when her life was turned upside down. “Why are you laughing?” Rebekah titled her head in confusion. She didn’t think she had said anything funny.

“Oh, Rebekah,” Mary answered. “I’m just laughing because I really never thought of myself as being special. I’ve lived a quiet and ordinary life up until this point. But as you can see, things are going to change for me soon.” Mary stopped petting Imhotep and laid her hand gently on her belly.

Esther suddenly spoke up. “I didn’t want to pry, but I had noticed that you are with child. Do you think you’ll be giving birth soon?”

Mary let out a tired sigh. “I certainly feel ready, though I would like to get done with this census and make it home to Nazareth before the baby is born. All of this walking has certainly been exhausting. It wasn’t too bad at first, but now I’m just thankful that we’re nearly to Bethlehem.”

Esther could understand how Mary was feeling. She remembered her final days before giving birth to Rebekah. It was an exhausting time, but also exciting, as she anticipated the birth of her beloved child. “You just rest there while I pick up after our meal.” Esther told her. “I’m sure you need the rest much more than any of us.” Esther gathered up the leftover food from their meal and carried it over to the cart.

Rebekah moved closer to Mary and Imhotep so that she could scratch her cat behind his ears. Imhotep shifted a bit, but continued leaning against Mary. “Oh!” Mary gasped, as Imhotep’s head jerked up, startled by some sudden movement.

“Are you alright?” Rebekah asked.

“I’m just fine, Rebekah,” Mary replied. “The baby just gave me quite a kick. I wasn’t expecting it, and neither was your cat. What did you say his name was?”

“His name is Imhotep. That was the Egyptian name that he was given, before my father received him as a gift. It means ‘the one who comes in peace,’” Rebekah proudly told her.

“The one who comes in peace,” Mary repeated the words as she pondered their meaning. “I like that.” Mary suddenly made an audible gasp as she reached her other hand down to her belly. “The baby is very active right now. Would you like to feel a kick?” 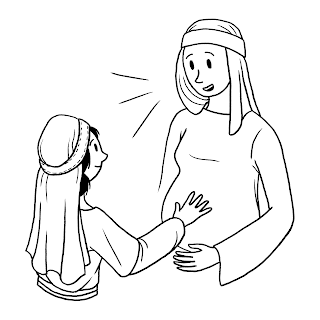 “If it’s okay with you,” Rebekah said, with some excitement in her voice. Mary nodded her head as Rebekah laid her hand on Mary’s belly and immediately felt movement against her hand. Rebekah withdrew her hand for a second, but then placed it down again and felt more movement. “Is that your ahuva?” she asked, remembering the special name her parents always called her.