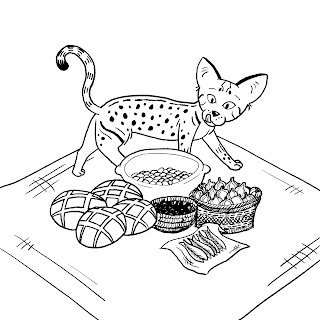 Daniel and Joseph spread some blankets on the ground, while Rebekah helped Esther bring a basket of food over to the spot where they were preparing to eat.  Esther had brought plenty of food on the trip, since they were uncertain about how long the journey would take.  She set out bread, dried fish, olives, dates and figs. “Please, eat as much as you would like,” Esther told their guests. “I packed plenty for our journey and we can get more in Bethlehem for our travels home.” Imhotep seemed very interested in everything that was being set out for the evening meal.

“That is very generous of you,” Mary replied.  “How can we thank you for such a wonderful gift?”

“It’s our pleasure to share the gifts that God has given us with others,” Esther said. “My husband and his family own an olive orchard in the town of Nain.”

“Well, that explains it!” Joseph proclaimed with a grin. “These are the best tasting olives I’ve ever had!”

“Thank you,” Daniel responded. “We take pride in how we cure our olives and do our best to make them as flavorful as we can. So where are the two of you from?"

“We come from Nazareth where I am a carpenter,” Joseph explained.

“A carpenter? How wonderful!” Daniel exclaimed. “I’ve been having a little problem with my cart and I was hoping to find a carpenter to look at it in Bethlehem.”

“Well, why don’t I look at it right now?” Joseph offered. “I may be able to help you with your cart if it isn’t too serious of a problem.”  Daniel and Joseph got up and walked off toward the cart to see what could be done. Imhotep, who had been observing from the edge of the blanket, moved in and searched to see if any food had been left behind where the two men had been sitting.

“Here you go, Imhotep,” Rebekah called.  She handed a piece of dried fish to her cat, who snatched it up quickly and happily chewed it.

“What kind of animal is that, Rebekah?” Mary inquired.

“He's a cat. He was given to my father on his most recent trip to Egypt where he goes to trade our olive oil. He’s a wonderful companion and does an excellent job of keeping mice and other pests out of our grain.  He even saved Mother from a snake that was in our home.” Rebekah was proud to boast about Imhotep. “He is also very soft and loves to be petted.”

Imhotep seemed to know that Rebekah was talking about him.  For some reason the cat was attracted to Mary and he softly padded toward her. He rested up against Mary's abdomen and began to purr loudly. Mary didn’t seem shocked by his actions at all, as she gently reached out a hand to stroke his fur.

“I’ve never seen Imhotep be so friendly with a stranger before,” Rebekah stated. “He must think you’re very special.”