After seven days of travel, the excitement of the journey was wearing off for Rebekah. She grew tired of riding in the cart, but was also weary of having to walk. Imhotep had no problem keeping himself entertained on their travels, but Rebekah was ready for it to be over. She was careful not to voice any of her complaints to her parents though, because she knew that she might not be allowed to go on future trading trips with her father. She had dreamed of going on trips like this for as long as she could remember, so the last thing she wanted to do was mess things up by complaining.

During the past week, the group they traveled with was constantly changing. The donkey they brought along on their journey had definitely slowed them down.  It had a mind of its own, so they found that on some days, they would travel for 8 hours, and on other days they’d barely be traveling for half that time. Many of their travel companions had continued on ahead of them, and others, coming from all over Galilee, had caught up and joined them. Rebekah was amazed to see how many others were from the house of David.  Her father told her that it would be quite crowded in Bethlehem because of the census, and seeing their ever changing and growing group, proved to Rebekah that her father was right. 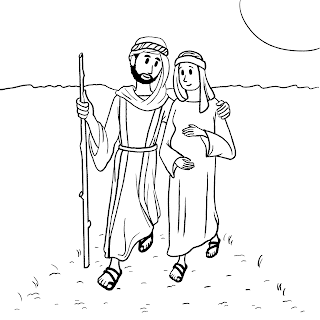 Late in the afternoon on the 8th day,  Rebekah was walking alongside the cart, while Imhotep prowled along the path, searching for small mammals to chase. Suddenly the encountered a couple who was walking in the same direction. The man had his arm wrapped around the woman, and she seemed to be walking with a bit of a struggle. As the traveling group came alongside the pair, Daniel greeted them.

“Shalom,” he said, which is a traditional Hebrew greeting that means ‘peace’. “Where are you traveling to?” he inquired.

“We’re on our way to Bethlehem, for the census,” replied the man. “Where are you going?” He and the woman stopped walking.  She seemed relieved to have a break.

Daniel brought the cart to a stop as he continued their conversation. “We’re also heading to Bethlehem. This is my wife Esther, and my daughter, Rebekah,” he said, introducing his family.

“I’m Joseph, and this is Mary,” the man said as he gestured toward the woman he was with.  "We were hoping this would be the final day of our travels, but it appears we won’t reach Bethlehem yet today.”

“No,” Daniel agreed. “It would be impossible to make it there until sometime well after midnight.  Would you like to stay with us tonight and share a meal? We have plenty of food along and this appears to be a good place to rest for the night.”

“That would be wonderful,” Joseph answered. “We’re always happy to meet new members of the house of David. Thank you for your hospitality.”

Next: A Good Deed