Rebekah had never travelled as far as Bethlehem before, so she was very excited, though a little nervous as well. Her father has shared so many stories about his travels with her that she was eager to gain some new experiences on her own.  They were traveling in a small group, alongside a few others citizens of Nain who were also from the house of David. As they ambled along the road, they moved fairly slowly because the stubborn donkey frequently wanted to rest. Anyone who has ever been around a donkey knows that there’s little chance of convincing one to move if it has decided it’s time for a break.

Some of the other children in their traveling group took notice of Imhotep and peppered Rebekah with questions about her new little friend. They tried to pet him and hold him, but Imhotep was not very open to that.  He was more interested in prowling around as they traveled, looking for tasty snacks in every patch of brush they encountered. Imhotep was not afraid to wander off on his own, and Rebekah would often lose sight of him; but it wouldn’t be long before he would come racing back and leap into the cart to be by her side.

It wasn't long before their travels brought them to the Jordan River. This route may not have been the shortest way to travel from Nain to Bethlehem, but it would certainly be the easiest. Upon reaching the river, they turned south, and for the rest of the journey they had fairly level ground and enjoyed the benefits of being near the river.

When Imhotep first saw the river, he was very curious.  The cat moved among the plants growing along the water's edge, searching for things to devour. He froze when he noticed something moving slowly along the river bank.  He wondered if it was something to flee from, or something to hunt. Rebekah saw Imhotep sitting as still as a statue, so she hopped out of the cart to go and see what he was up to.  When she got closer, she noticed that there was a large snapping turtle facing Imhotep.  The turtle was moving quite slowly, and she wondered if Imhotep was planning an attack. As if reading her mind, the stealthy cat sprang forward toward the turtle, causing it to quickly retreat inside its shell leaving a puzzled Imhotep to figure out what to do next.  Imhotep nosed around the shell, and nearly got bitten as the turtle’s head flashed out of the shell, snapping its powerful jaws in the cat's direction.  Imhotep tried circling around to the back of the turtle, but seemed to be much less confident of his plan.  After a few moments, he turned and walked away, content to call that contest a draw.  Rebekah strolled over to Imhotep and scooped him up. 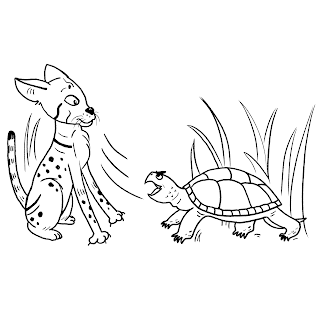 “You'd better learn to be more careful, Imhotep,” she warned him. “I’ve seen those turtles before, and they can easily snap a stick in two. Mice and voles are a much better option and they are plentiful in this area.”  She carried him back toward the cart, where she got him a small scrap of fish to nibble on and proceeded to scratch him behind his ears. Imhotep curled up deeper into her lap and soon fell asleep, obviously tired out from his turtle adventure.