Chapter 12 - Preparing for a Big Adventure

As they ate their last evening meal before the journey ahead of them, Rebekah was still confused about why they were going to Bethlehem.  “Father, I thought we were supposed to be counted in our homeland.  Isn’t that here in Nain, where we have our olive groves?” asked Rebekah. She knew that when a Roman census took place, citizens were asked to return to the place where they owned land, in order to be counted. Rebekah had never been to Bethlehem before so it didn’t make any sense to her that they would have to travel so far.

“I know it seems odd to you,” her father replied, “but Jewish custom allows us to return to the home of our ancestors for a census, and the Roman rulers have agreed to our request.  You know what house we belong to, right?”

“Yes, Father.  We’re from the house of David.” Rebekah answered. “But David was a great king.  Why aren’t we going to Jerusalem for the census? Surely that’s where David lived.”

Daniel liked how curious his daughter was. “David set up Jerusalem as his home when he was the king, but he was born elsewhere.” he said.

“Bethlehem! David was born in Bethlehem!” Rebekah exclaimed.  Now she understood why they had to make the journey to Bethlehem.  It was the first home of David.

“Yes he was, Rebekah.” Daniel said. “And a few days from now you will see it, too. Now let’s finish getting your things ready for the journey, and get a good night’s sleep. We have to get started in the morning if we’re going to make it to Bethlehem on schedule.”

Rebekah and her mother cleaned up after the meal, while Imhotep searched for morsels that may have been dropped.  He found a few olives, but sniffed at them once, and turned away quickly. He had gotten quite a taste for the dried fish that he was given on special occasions.  Daniel went outside and helped load up the cart he would be taking on the trip.  He and his brothers had decided their families would travel separately to Bethlehem based on what they were taking and how many members there were in each of their households. 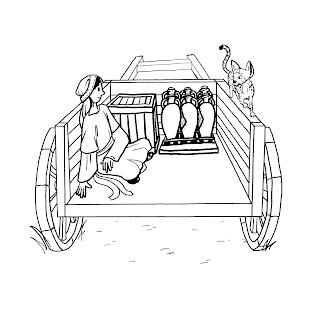 After a good night’s sleep, Daniel, Esther and Rebekah loaded a donkey with a small travel pack and all of the food they necessary for the trip. Daniel also decided to take a cart full of olive oil, grain and olives to trade, since there would be many people coming to Bethlehem from all over the region. Imhotep was already waiting for them in the cart.  He seemed eager to begin their travels and he meowed impatiently.

“Are you excited for our big adventure, Imhotep?” Rebekah asked her new best friend as she climbed into the cart beside him. Imhotep let out another meow, crawling onto her lap and curling up, finding a comfortable spot to rest.

“On to Bethlehem!” Daniel eagerly proclaimed, patting the ox on its side to set it in motion, while leading the donkey by its bridle as he walked beside the trundling cart.

Next: The Journey Begins