Chapter 11 - Part of the Family

Emma and Ethan finally stirred a little, when their dad finished telling the part about Imhotep killing the snake. “I know you said this story was historical fiction, but the part of the story where Imhotep killed the snake... is that true, or something you just made up?” Ethan asked with a wide-eyed look on his face. His dad realized that his plan to tell them a story to get them ready for bed may be backfiring.

“Cats are actually very good at fighting and killing snakes.  They’re fast, they have sharp teeth, and their reflexes are extremely quick. It’s not hard for them to avoid a snake’s bite and get around behind them to quickly win the fight”, explained Dad. “Cats are tremendous hunters as well.  When I was about your age, we had a cat that would regularly bring dead rabbits, birds, and even a pheasant to our front porch. I actually saw that cat stalking a deer that was in our front yard.” Dad chuckled at the memory.

“No, it only managed to chase the deer off,” her dad answered, putting Emma at ease. “We had better get back to the story. I never meant for it to go on this long.”

Ethan smiled and said, “That’s okay, Dad! I’ll sacrifice my sleep so you can finish.”  Ethan never liked to go to bed and would stay up all night if his parents would let him.

“Alright,” dad replied. “Let’s get back to Nain and see what’s happening to Imhotep and his new family.” 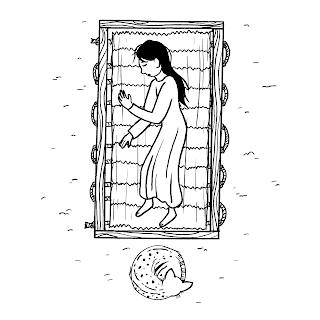 After the incident with the snake, it didn’t take long for Imhotep to become a prized member of the family.  Daniel loved how Imhotep kept the grain supply nearly free of mice.  Esther spoiled Imhotep with frequent morsels of dried fish as he walked through the house, always alert for pests that didn’t belong. Imhotep and Rebekah seemed to go everywhere together, and had quickly formed a very strong bond.  He was always willing to be held by her, and curled up by her feet every night when she went to sleep.

The others in the village didn’t quite know what to make of this new, furry resident. As they saw Imhotep moving around the town, they often stopped and stared at him.  Some of the villagers would throw stones at him since they had never seen a cat and were afraid of him. Imhotep didn’t help to calm their fears as he hissed whenever someone came to visit the house, and left his mark on a few of the children who tried to pull his tail or poke at him.  He was part of Rebekah’s family and had little time for anyone else who lived in Nain.

After a few days of unpacking, following the long journey to Egypt, Daniel finally caught up on his rest. He longed to fall back into his routine of working with his family in the grove, but he also knew of the upcoming trip they would have to take because of the census that they heard about when they were in Gaza. He wished he could ignore the census and just continue with his normal life, but a person doesn't dare to ignore a Roman decree, especially one that came from Caesar Augustus. Like most of the Jewish people, Daniel hated living under Roman rule, but there was little he could do about it. The Romans took their census so they could be sure they were getting as much tax money as they could from the Jewish people. “One day,” Daniel thought, “the Messiah will come and lead us out from under the rule of the Romans.”