Chapter 10 - Imhotep Gets a New Home

As was usually the case, the return of the travelers brought excitement and chaos to the households surrounding the olive grove.  Small children ran about as they scurried to greet their fathers.  Wives busily prepared for the large quantities of food and other necessities being brought home to them.  The men, tired from their travels, knew that they still had plenty of work to do, as they moved the grain and other goods into their homes and storage containers. Imhotep, used to a life in a busy marketplace, seemed unfazed by the activity around him.  He followed behind Rebekah as she made her way toward the house.

Esther was inside the kitchen when Rebekah came through the door. “Mother!” she called out. “We’re home!”  Rebekah looked behind her and saw that Imhotep was within reach.  She picked him up and held him close, which he seemed to greatly enjoy.  “Mother will love him,” she thought to herself.

Esther was down on her knees, reaching into storage areas within the kitchen, and making room for the many things that she knew Daniel would be bringing into the house. “I’m glad you’re back safely, Rebekah.  Can you come in here and help me make some room before your father starts bringing things in?” her mother asked while continuing her work.  Rebekah headed slowly toward the kitchen, thinking through what she would say about Imhotep.  Before she could say anything, Imhotep leapt from her arms and darted toward Esther. He made a loud hissing noise as he arched his back and the hair behind his head stood straight up. Rebekah noticed the claws pop out from his paws as he prepared to leap forward.  "Oh, no!” she exclaimed as she wondered why Imhotep was reacting so violently.

Esther heard the hissing noise and looked up to see a frightening creature looking menacingly at her.  She stood and stared with a mixture of fear and confusion as the cat pounced in her direction.  Before she could react, Imhotep raced past her and swiped a paw at a snake that was in mid-air, about to strike Esther in the ankle.  The snake turned its attention to Imhotep, who hissed again and batted the snake in the head.  The snake lunged forward and Imhotep quickly spun around and bit down on it behind its head, giving it a quick shake and ending the fight as swiftly as it began. Imhotep dropped the snake from his mouth, looked up at Rebekah, and let out a quiet “Meow”, as if to say, “Did I do good?” 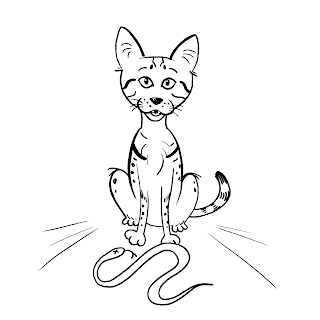 “Rebekah!” Esther yelled. “Are you all right? What is that creature doing in our house? Did it just kill that snake? Where did that snake come from?” Esther was still trying to process what just happened. She looked behind her to see the remains of the snake lying closer to her than she would have liked. Imhotep had transformed from a dangerous hunter into a meek and curious cat, glancing up at her as if seeking approval. How could something that so swiftly dispatched a dangerous snake also look so soft to the touch and inviting to cuddle?

“Mother, this is Imhotep and he is a cat,” answered Rebekah.  “He was given to Father in Egypt as a reward for saving a man’s life. Father gave him to me. The Egyptians believe that cats bring good luck to their owners, and I know we do not believe in luck, but he certainly is a blessing from God as he may have saved your life just now."

Next: Part of the Family

My Christmas Gift to You

As the staff was preparing for the Christmas season at the church where I am employed as director of digital ministries, we decided on the theme. "Home for Christmas", as many of us may literally be worshipping in our homes, due to the pandemic. My vision was to film some of our staff members talking about their favorite Christmas memories, and my thoughts turned to my own childhood.  When I was probably around 10 years old, I remember rushing home from school in December so I could find the daily newspaper that we subscribed to.  A Christmas story was printed in the newspaper, and each day you'd get the next installment of it. I had thought the stories were about elves, but after doing some research, I found they were actually about Santa. The stories were written by Lucrece Beale, and at the time I was reading them, they were reprints from past years. I found a website that has a large collection of those stories, in case you wanted to check them out. The stories were
Read more

“Emma! Ethan! You'd better get in here fast if you still want a story before bed.” This wasn’t the first time their father had to get after them about being ready for bed on time, and he was sure it wouldn’t be the last time either. Emma and Ethan were normal kids, which meant they always seemed to move in slow motion when it came time to brush their teeth, get their pajamas on, and get ready for bed. These days, they seemed to be a little better about doing what they were told though, as Christmas was less than a week away.  “I’m ready, Dad,” Ethan said with a sly grin on his face as he came running down the hallway and into the living room. “I beat you, Emma! I win!” ‘It’s not a race, Ethan,” his dad reminded him with a slight smile on his face. Ethan’s father was a pretty competitive person himself, and he remembered saying the same thing to his younger sister on more than one occasion when he was about Ethan’s age. “I’m ready too, Dad,” Emma stated as she slowly walked
Read more

Chapter 2 - Cats in the Bible?

“Did you say pet?” Emma said with a puzzled look on her face. “I don’t remember ever hearing about Jesus having a pet in any of the Bible stories I’ve read.” Emma loved the Bible stories she learned about in Sunday School and couldn’t believe she was never told about Jesus and His pet. “What kind of pet are you talking about, Dad?” Ethan chimed in. “ I bet if Jesus was going to have a pet, it’d be something amazing, like a huge lion or a unicorn!”  Ethan’s imagination was running wild as his brain wrestled with the idea of the Baby Jesus having a pet of His own. “Maybe His pet was just a sheep or cow that was in the stable where Baby Jesus was born.” Their dad smiled at the children as they continued to try to figure out why they had never heard about Jesus having a pet. “This story is actually something called ‘Historical Fiction’ . It’s a story that is made up, but has some characters in it that were real people in the past. It also takes place in a setting that actually existed l
Read more